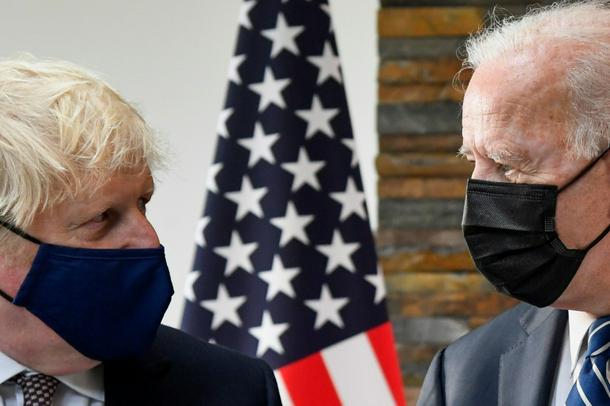 Boris Johnson (L) has welcomed Joe Biden to England for the G7 summit in Cornwall, where leaders will discuss a range of issues including China. They have already pledged a billion doses of vaccine to the world's poorest countries

London (AFP) - European stock markets closed the week in a bullish mood Friday but Wall Street was flat as traders weighed the potential impact of a spike in US inflation on economic stimulus measures.

Investors have been concerned that the global economic recovery will push prices up and prompt the US Federal Reserve and other central banks to raise interest rates and wind down bond-buying programmes.

Data released Thursday showed the US inflation rate at its highest level in 13 years, but the S&P 500 still finished the day’s trading at a record.

Wall Street opened higher again but was in flat territory later in the morning.

European stock markets closed higher, however, while Tokyo ended the day flat and Shanghai was in the red.

“European stocks are rounding out the week on a solid footing, but the same cannot be said of Wall Street, which has shifted from worrying about CPI (consumer price index) to fretting about the Fed,” said Chris Beauchamp, chief market analyst at IG.

“Inflation was strong, but those expecting a major step-change from the Fed next week are likely to be disappointed,” he said, referring to an upcoming policy meeting of the US central bank.

Investors in Europe were cheered by the European Central Bank’s own meeting this week.

ECB chief Christine Lagarde on Thursday said it would be “too early and premature” to discuss tightening monetary policy, even as officials lifted their annual inflation outlook.

“European markets have ripped higher to close the week in a bullish mood,” Fawad Razaqzada, analyst at ThinkMarkets, told AFP.

“With the central bank covering their backs, investors bought every single short-term dip in stocks, causing the Euro Stoxx 50 and the CAC 40 to hit new highs for the year on Friday, with the German DAX also nearing its record high hit last week.”

But other analysts wonder how long the high readings will last and when the Fed will consider it time to act.

Fidelity International’s Salman Ahmed warned there were signs that high inflation could be more long-term.

“Both the magnitude of upside surprises and the duration of the current high inflation phase will matter when it comes to justifying” current policy of low interest rates and big stimulus, he said in a commentary.

Oil prices also rose as the International Energy Agency said crude demand was set to rise above pre-pandemic levels by the end of next year.

Elsewhere, traders are keeping an eye on Friday’s start to the G7 summit in Cornwall, southwest England.

Leaders from the Group of Seven wealthy nations pledged to donate a billion vaccines for the world’s poorest countries.