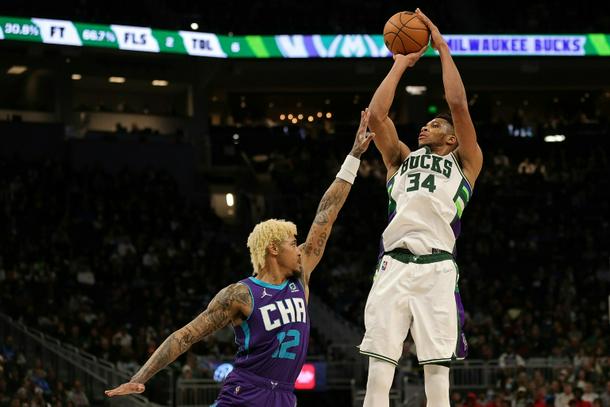 Los Angeles (AFP) - Giannis Antetokounmpo drove for the game-winning layup with two seconds left on Wednesday, lifting the NBA champion Milwaukee Bucks to a 127-125 victory over the Charlotte Hornets.

Antetokounmpo, a two-time NBA Most Valuable Player and MVP of the 2021 Finals, scored 40 points with 12 rebounds and nine assists as the Bucks rallied for an eighth straight win.

The Hornets were on fire early at FiServ Forum in Milwaukee, making 10 of 17 three-pointers in the first quarter.

They led by as many as 18 points in the first half, but couldn’t maintain the torrid pace, Milwaukee closing the deficit to 68-60 at halftime.

The Bucks took the lead for the first time with 2:26 remaining in the third quarter, when George Hill’s three-point play put them up 91-90.

They led by two going into a fourth quarter that developed into a back-and-forth battle that featured 10 lead changes.

Khris Middleton, who scored 21 points for the Bucks, drained a three-pointers with 52 seconds remaining for a 123-122 lead.

LaMelo Ball, who led the Hornets with 36 points, drained a three with 5.9 seconds left – enough time for Antetokounmpo to get the ball out of a timeout and drive for the winner.

There was little suspense in New Orleans, where the Dallas Mavericks led virtually all the way in a 139-107 rout of the Pelicans.

Luka Doncic scored 28 points and handed out 14 assists and Kristaps Porzingis added 20 points and 10 rebounds for the Mavs, who were coming off a 114-96 loss to Cleveland.

The Mavs – who had lost five of their past six – shook off their recent shooting woes in a big way, connecting on 57 of 83 shots from the floor, including 18 three-pointers. 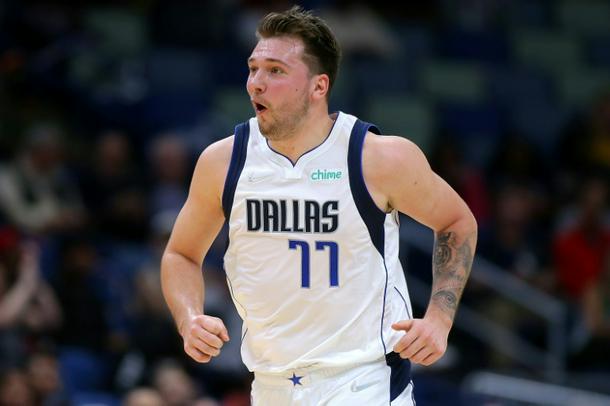 Their 68.7 shooting percentage was a franchise record for a game, breaking the previous high of 68.6 set in 1983.

“It all started with Luka,” Porzingis said. “Our energy was there … the chain-reaction starting from him.”

Doncic, who had a triple-double in the loss to Cleveland, had 22 points and 10 assists in the first half to join Damian Lillard and Trae Young as the only players with multiple 20-point, 10-assist halves since the 2018-19 season.

“We came out with a lot of energy,” Doncic said. “Those shots were open, so we knocked them down.”

It was close in Boston, where Jayson Tatum scored 26 points and pulled down a career-high 16 rebounds as the Celtics held on for an 88-87 victory over the Philadelphia 76ers.

Tatum scored 11 points in the fourth quarter and Robert Williams blocked a shot from Georges Niang at the buzzer to secure the win for the hosts.

Boston stepped it up defensively and Sixers big man Joel Embiid was held to three-of-17 shooting, scoring 13 points and pulling down 18 rebounds.

Dennis Schroder drove to the basket for a layup to put Boston up 88-84 with 37.1sec remaining.

Danny Green drained a three-pointer to trim the deficit to one point and after Schroder came up empty on another drive Philadelphia grabbed the rebound and got the ball to Niang.

Williams deflected his shot, and Celtics got the win in their first game since November 3 with a full complement of players.

“Hopefully we can continue to keep guys healthy and see how good we can be,” Tatum said.

In Miami, the Heat got an unwelcome look at what they can expect from life without injured Bam Adebayo and Jimmy Butler, falling 111-85 to the visiting Cavaliers.

Adebayo is expected to miss some six weeks after thumb surgery, and Butler missed his second straight game with a bruised tailbone that could sideline him another couple of contests.

Tyler Herro led the Heat with 21 points and DeWayne Dedmon added 11 points and 13 rebounds, but it wasn’t nearly enough against the Cavaliers, who pulled down 46 rebounds to Miami’s 28 and drained 16 three-pointers.

Kevin Love came off the bench to lead the Cavaliers with 22 points, one of six Cleveland players to score in double figures.