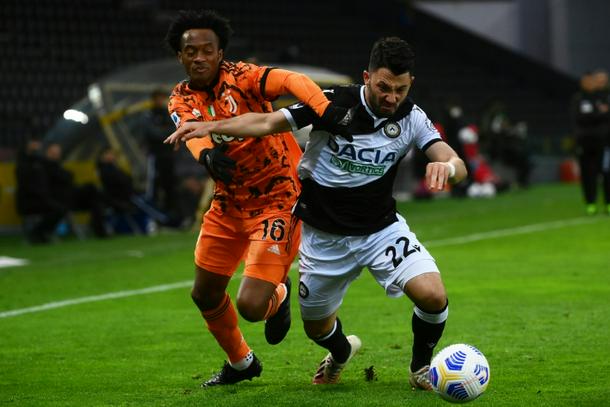 Milan (AFP) - Tolgay Arslan scored eight minutes into stoppage time to snatch a 4-4 draw for Udinese at the end of an incredible match at Lazio which featured comebacks and three red cards.

Lazio thought they had won a memorable encounter at the Stadio Olimpico after rebounding from 3-1 down at half-time to lead 4-3 with 11 minutes remaining.

However Arslan curled home a superb first-time strike from Fernando Forestieri’s free-kick to save the unlikeliest of points for Luca Gotti’s team.

“It was a great match, they’re a good team with a great coach and a point for us is very important,” Arslan, whose goal celebration sparked a touchline brawl in which Walace was sent off, said to Sky.

“Sure I celebrated but this is football, it’s about emotions.”

Maurizio Sarri’s side were already under pressure after being humiliated at Napoli at the weekend and things looked even bleaker at full-time after conceding four times twice is as many league matches.

They have let in a whopping 29 goals in 15 matches and sit ninth in Serie A, nine points from the Champions League places.

“It leaves a bad taste in the mouth,” said Sarri.

“There are positive and negative things about the match. In the second half the team showed desire and character, but in the first half we were completely chaotic.”

Lazio got off to the worst possible start in front of a sparsely populated and wet Stadio Olimpico.

Beto nodded the away side in front with a superb header with 16 minutes on the clock and the home crowd started to barrack their side with whistles just after the half hour mark, when the Portuguese forward brilliantly rounded Pepe Reina and rolled home his sixth Serie A goal of the season.

Ciro Immobile halved the deficit for the home side shortly afterwards with a simple tap-in but Lazio looked in serious trouble a minute before the break when Nahuel Molina expertly finished after a lightning counter-attack.

Sarri’s charges came out firing after the restart and were level before the hour through two fine finishes.

First Pedro collected the ball on the edge of the area in the 51st minute and drilled a low shot into the bottom corner.

And five minutes later Sergej Milinkovic-Savic scored the goal of the night, calmly looking up before whipping in a curling left-footed shot that clipped in off the post.

A minute later Patric picked up a silly second yellow card for a foul on Isaac Success, leaving the hosts down to 10 just as their tails were up.

Fortunately for Lazio Molina was sent off for a second booking of his own in the 69th minute and parity of numbers allowed the home side to push for the win.

First Pedro flashed just wide from a Milinkovic-Savic knockdown and then Francesco Acerbi had to wait an age for what he thought was his winning goal, which had initially been ruled out for offside, to be given following a VAR check.

But with the home fans whistling again, only this time for the end of the game, Arslan stepped up to silence the crowd and start a shoving match on the sidelines.

In Thursday’s other match, Empoli also came back to two goals down to draw 2-2 at Torino.