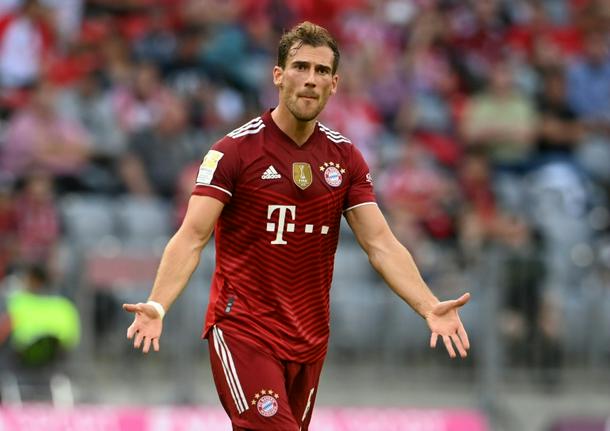 Berlin (AFP) - Bayern Munich hope Germany midfielder Leon Goretzka can shake off a hip injury to feature in their Bundesliga showdown at Borussia Dortmund on Saturday.

“With Leon, the chances are 60⁄40, so it won’t be decided until tomorrow. There is a pain issue,” Bayern head coach Julian Nagelsmann said Friday.

“I hope he plays, but the game is too big to let someone play who is not at 100 percent.”

German league leaders Bayern are just a point ahead of second-placed Dortmund going into the match at Signal Iduna Park.

Bayern already have Joshua Kimmich in house quarantine after testing positive for Covid-19 and his midfield partner Goretzka is also struggling.

If Goretzka drops out, 18-year-old attacking midfielder Jamal Musiala is likely to deputise after training in the defensive midfield in preparation.

Bayern’s back-up striker Eric Maxim Choupo-Moting can leave quarantine Friday if his PCR test for covid is negative, but Nagelsmann says he is not an option to play.

Bayern striker Robert Lewandowski will face his former club having missed out to Lionel Messi when the Ballon d’Or winner was announced Monday.

“He doesn’t seem frustrated. In my eyes he would have deserved the title, but he’s incredibly professional,” Nagelsmann said of Lewandowski.

“On one hand, it’s important to let the disappointment sink in and at the same time to draw energy from it.”

Record levels of the coronavirus across Germany means Signal Iduna Park - which usually holds 80,000 - will have a maximum crowd of 15,000.

Nevertheless, Nagelsmann admits feeling the pressure ahead of his first match against Dortmund as Bayern coach, “I noticed yesterday evening that I was a little more tense”.

As coach of former clubs Hoffenheim and RB Leipzig, Nagelsmann won only once against Dortmund in 12 Bundesliga games.

“I haven’t had the best statistics, but this is an important game for our club,” Nagelsmann added.

“We have a certain claim. The anticipation is already very high,” he added as Bayern look to continue their run of six straight wins over Dortmund.