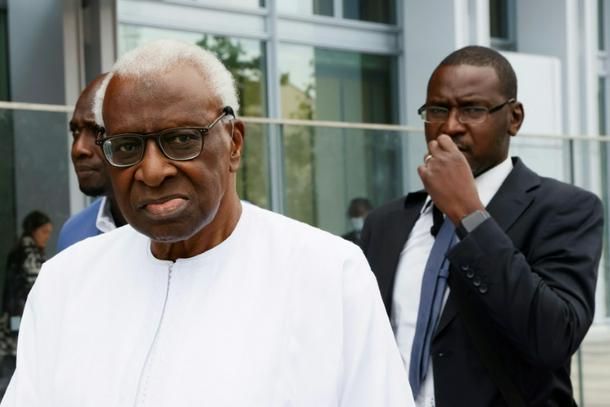 Lamine Diack, who has died aged 88, became embroiled in corruption after heading global athletics from 1999 to 2015

Dakar (AFP) - The former head of global athletics Lamine Diack, who presided over the sport from 1999 to 2015 but was later convicted for corruption, has died aged 88, his family told AFP.

The Senegalese was head of the International Association of Athletics Federations (IAAF), now renamed World Athletics, the world governing body of track and field, the cornerstone of Olympic sport.

Diack, who was also a powerful figure at the International Olympic Committee (IOC), was found guilty of corruption by a French court in 2020 for covering up Russian doping cases in exchange for millions of dollars of bribes.

The trial in Paris heard that the money was paid in return for “full protection”, to allow Russian athletes who should have been banned to escape punishment.

Twenty-three Russian athletes had their doping offences hushed up so they could compete at the 2012 London Olympics and 2013 world championships in Moscow.

Because of his age, Diack, a former long jumper, football coach and then businessman and politician who was decorated in the Kremlin in late 2011, was spared jail.

“Following confirmation from the Confederation of African Athletics, we note the death of Lamine Diack, President of the IAAF from 1999 to 2015.”

His son Papa Massata Diack, a former marketing executive for the IAAF, was tried in absentia because Senegal refused to extradite him. He was sentenced to five years in prison, fined one million euros and banned from all sport for 10 years.

Lamine Diack, a member of the IOC from 1999 to 2013 and then an honorary member from 2014-15, was embroiled in another corruption affair linked to the awarding of the 2016 Rio Olympics and the Tokyo Olympics, that were postponed because of the pandemic but took place this year.

Despite not being jailed over the Russian corruption, he was held in France because of his indictment in the case involving suspected Olympic vote-buying. His passport had been confiscated.

But a judge soon lifted the ban on Diack leaving France, provided he paid a bond and that he continued to respond to summonses.

Senegalese Premier League side Jaraaf de Dakar, where Diack was club president, said it had sold part of its headquarters property to pay the bail.

Diack was replaced by Britain’s Sebastian Coe in August 2015 as head of world athletics. The disgraced Senegalese had resigned from the IOC in the same year.

Born in Dakar on June 7, 1933, Diack started his sporting career as a long jumper, winning the French athletics championships title in 1958. A knee injury prevented him from competing in the 1960 Olympics, however.

He was also a footballer and was technical director of Senegal’s national team from 1966 to 1969.

Diack also became head of Senegal’s Olympic Committee, mayor of Dakar, a lawmaker and was head of the West African country’s national water company before becoming the first non-European to take over as head of the IAAF following the sudden death of its previous president Primo Nebiolo.

The African power-broker said he had played a key role in globalising athletics and his time at the top certainly coincided with a huge boom in its revenues.

Diack was in charge as the sport grew and developed beyond its European and North American core.

He oversaw its move from amateur to professional status, ensured complete equality in events and prize money for men and women, and established international competition circuits for athletes in all the disciplines.

But the Senegalese had previous brushes with scandal before the most recent charges.

Diack and Issa Hayatou, acting FIFA president for four months in wake of the 2015 corruption case against Sepp Blatter, both received warnings from the IOC in 2011 over cash payments they received from International Sport and Leisure (ISL), a marketing company whose collapse caused a major scandal for football’s governing body.