'I like to think I'm one of the best': Real Sociedad's Mikel Merino

Mikel Merino has been a stand-out player this season for Real Sociedad, who play Real Madrid in La Liga on Saturday

He was not talking about the league’s top scorer, Karim Benzema, or Luka Modric, its only remaining winner of the Ballon d’Or.

He was not referring to one of Barcelona’s dazzling young talents like Ansu Fati or Pedri, or even the 34-year-old Luis Suarez, who a few months before had won the title for Atletico Madrid.

And if there was any suspicion he had been momentarily carried away, swept into hyperbole in the joy of victory, a month later Imanol hammered home the point.

“I said it before and I’ll say it again in case it’s not clear,” he said.

“Mikel Merino is the best player in La Liga.”

By then Real Sociedad were no longer trailing Real Madrid but above them, a win over Osasuna leaving them top of the table for a fourth week in a row.

After scoring the opening goal, the 25-year-old Merino stood still with his palms held up, in homage to the club of his home town of Pamplona and the one that gave him his professional debut, aged 18.

Merino has since been to Borussia Dortmund and Newcastle before three years ago, returning to Spain with Real Sociedad. This term, the midfielder has been the stand-out player in a side that has been arguably the story of the season.

Does he feel like the best player in Spain?

“Every year I feel better and more important and to be honest yes, I feel like - well, I’m not going to say the best in La Liga - but I like to think I’m one of the best,” Merino told AFP. “That’s the confidence you have to have otherwise how do you get better?”

Real Madrid have taken a seven-point lead at the top of La Liga but Real Sociedad in third have looked as likely as anyone to keep up, with the chance now to prove it at the Reale Arena.

“Being top or whatever right now, honestly we don’t care,” Merino said.

“There are always moments when your legs work better or your head is clearer so what we have said is a bad streak will almost certainly come - it’s impossible to keep the same rhythm all season - it’s normal, but we want it to be as short as possible.”

There is little normal, though, about Real Sociedad, the club that aims for 60 per cent of its first team to be from its local province of Gipuzkoa and where 16 of the current squad have come from the youth system. 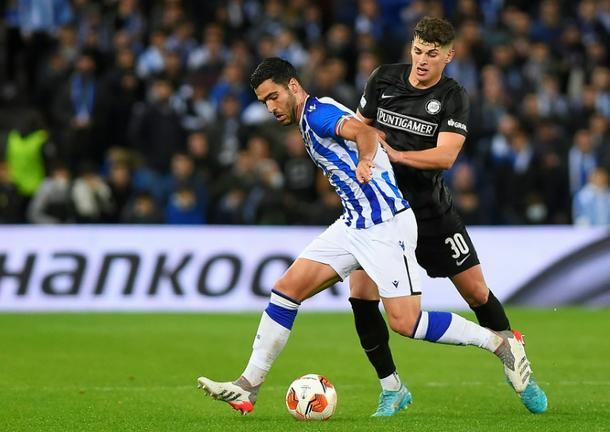 Their former midfielder Xabi Alonso is in charge of the B team while Imanol has played for and coached both the B team and the first team.

“Since Imanol arrived, he has made it very clear what he wants. The way he transmits his ideas means he gets the best out of us,” Merino said.

“And the other reason we are doing so well is the academy. We have a team that is well-balanced, with a few players from abroad who bring things players from here don’t have, but also home-grown players, who make the fans proud.”

Merino is somewhere in between, not a product of Zubieta, the famed Real Sociedad training centre, but hardly an outsider either, having grown up just 80 kilometres away.

“I come from Osasuna and there’s a similar idea there of how to educate players and children. People have similar values - to be humble, modest, hard-working - that environment they live in is very similar.

“So even though I’m not from la Real, coming here was like coming home.”

Merino also brings knowledge from his spells in England and Germany, where he played under Rafa Benitez for Newcastle and the “mathematical” Thomas Tuchel, now of Chelsea, at Dortmund.

“He insisted on the importance of having the ball, keeping it, playing the simple pass, to the right place with the first touch in the right direction and with the correct foot… When you’re young you don’t realise but these details make a difference.”

Merino’s year at Newcastle proved formative even if he was not given the opportunities he would have liked.

“Yeah, bloody hell, I learned a lot in the Premier League,” he said. “How to use your body, how to go into battle, how to handle such little time on the ball.

“When I was there, I was 20 or 21 and at that age you’re like a sponge, you absorb everything. Those details in many ways have made me who I am.”

What does he make of Newcastle now, under their new Saudi Arabian owners?

“It’s big, things will change, it’s a turning point for the club, not just because of the money but because now they have owners with real ambition, who want to make Newcastle into winners,” he said.

“There’s obviously a lot work to do but they’re on their way.”