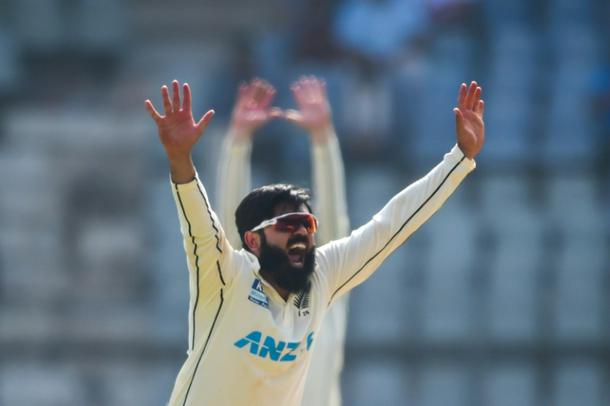 Left-armer Patel also picked up the first Indian wicket to fall, when Shubman Gill was caught by Ross Taylor at first slip after making 44.

Kohli lasted only four balls on his return to the team after stepping down from the Twenty20 captaincy and a short break following the World Cup, adjudged lbw.

The star batsman called for a review but the third umpire upheld the decision after numerous replays, some angles of which suggested the ball could have hit the bat first.

A visibly upset Kohli – who had won the toss and elected to bat – returned to the pavilion after having a word with the umpire and silence prevailed at the Wankhede Stadium.

Mayank Agarwal stood firm and reached his half-century before the break, to applause from the Mumbai crowd and the dressing room. He was unbeaten on 52 at tea and had first-match centurion Shreyas Iyer for company at seven.

The wickets were a boost for a New Zealand side which are without captain Kane Williamson, who was ruled out ahead of the toss with a troublesome elbow injury. Tom Latham is the stand-in-skipper.

The first session of the day was lost to wet patches at the stadium in following two days of unseasonal rain in Mumbai.