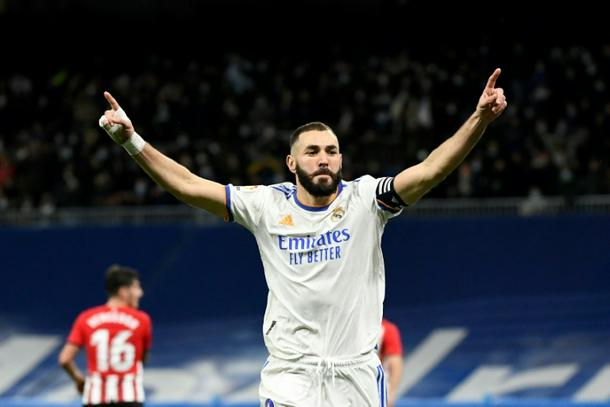 Karim Benzema scored the winner for Real Madrid against Athletic Bilbao in La Liga on Wednesday.

Benzema’s 20th goal in 24 games this season proved the difference in a 1-0 victory at the Santiago Bernabeu that puts Madrid firmly in charge of the Spanish title race, even after only 15 games played.

“We’re on a good run and I like the atmosphere right now in the team,” said Madrid coach Carlo Ancelotti.

A run of seven consecutive wins in all competitions has helped pull Ancelotti’s team away from the chasing pack and Benzema, along with the explosive Vinicius Junior, has been instrumental.

Ancelotti insisted on Tuesday Benzema had not been “crying” about losing out to Lionel Messi in the Ballon d’Or on Monday, with the Frenchman finishing fourth in the final vote.

But there was more than a hint of rebellion in the air when the Madrid fans toasted his goal by chanting “Karim, Ballon d’Or” and the 33-year-old responded by applauding them back.

Ancelotti predicted Benzema would be even more motivated to win the award next season and perhaps his best hope would be to play a decisive role in Madrid winning either La Liga or the Champions League.

With Barcelona rebuilding under Xavi Hernandez and Atletico Madrid struggling to balance their usually dependable defence with a wealth of options in attack, Real Madrid are certainly emerging as clear favourites now in Spain.

They defeated Sevilla 2-1 last weekend and now face third-placed Real Sociedad and second-placed Atletico in their next two games, fixtures that could give them a formidable lead if the victories keep coming.

Athletic, meanwhile, stay eighth, without a win now in six.

“Winning seven games in a row isn’t luck,” said Ancelotti. “This Real Madrid has character. When we don’t win with quality, we have other strengths we can use.”

Madrid rode their luck against Sevilla and were stretched again here, with Athletic squandering a string of golden opportunities.

The first came from a long ball over the top, which hit Eder Militao on the back and allowed Inaki Williams in, but he shot wide.

Then David Alaba left a long punt downfield for Thibaut Courtois behind him but Williams was there again, only for his first touch to let him down.

Raul Garcia had the best chance, with a free header from three yards out, but he nodded straight at Courtois and there was an air of inevitability about Madrid making Athletic pay.

Vinicius started it, with a driving run in off the left, exchanging with Luka Modric before feeding Marco Asensio, whose curled shot came back to Modric.

He fluffed the rebound but so badly that it fell nicely into the path of Benzema, who slotted in.

Athletic were still the better team in the second half and the home crowd grew increasingly agitated.

Raul Garcia’s shot had to be blocked by the sliding Lucas Vazquez and Courtois was required to deny Oihan Sancet. Mikel Vesga should have headed in late on but again Militao was there.