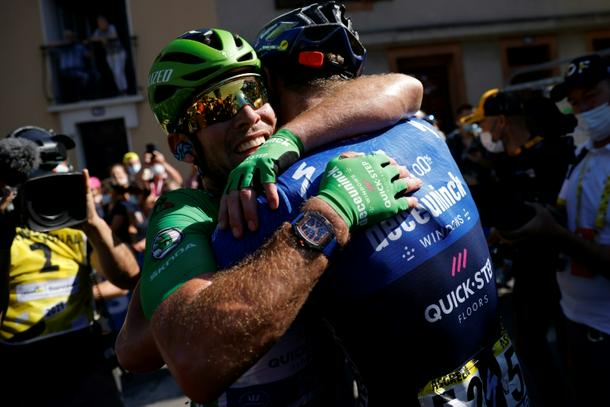 Mark Cavendish will race on in 2022

Cavendish broke a lengthy barren patch of illness, injury and poor form by storming back to win four Tour de France stages in 2021, at the age of 36.

“It’s a done deal with Mark, all we need is his signature, and that is coming, he’ll race one more season with us,” said Lefevere, whose team will race under the name of Quick Step-Alpha Vinyl next season.

“Mark wanted to extend his contract and I can’t deny him that,” Lefevere told Sporza television.

At the time he was teamless, without a Tour de France win in five years, and struggling to put a long bout of the tiring Epstein Barr virus behind him.

But Cavendish was welcomed ‘home’ to Deceuninck Quick-Step, who call themselves ‘the Wolfpack’, by Belgian team boss Lefevere, a larger-than-life character that Cavendish has always trusted.

Lefevere sent Cavendish to the level two Tour of Turkey in April and when he won four stages there, the foundation stone for a return to the top had been laid.

Lefevere said Cavendish was covalescing at homw in the UK but was due to join up with the rest of the team in Spain.

“Mark will be there but is not allowed to fly yet due to the injuries, so he’ll travel to Spain by car,” Lefevere said.