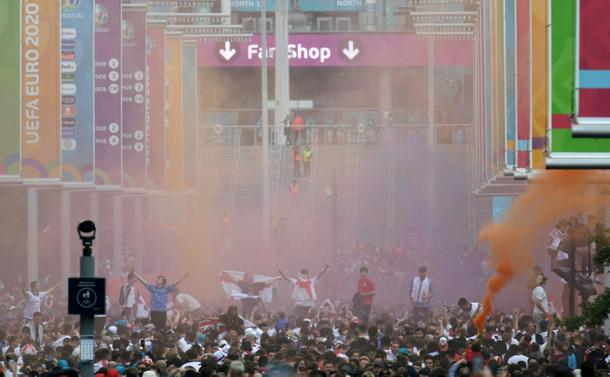 London (AFP) - Crowd trouble at the Euro 2020 final at Wembley could have led to tragedy if England had won the game, the stark findings of an independent review suggested on Friday.

A 128-page report into the chaos at the showpiece game on July 11 concluded there were real fears thousands of ticketless fans could have stormed the ground had England beaten Italy.

The author of the study called it a “near miss” that could have led to deaths or serious injury, blaming it on a reckless “horde” of 6,000 or more fans without tickets.

“I am clear that we were close to fatalities and/or life-changing injuries for some, potentially many, in attendance,” she added, calling the trouble a “national shame”.

England’s Football Association governing body, which commissioned the study, apologised and said it accepted its conclusions in full.

As a punishment, UEFA has banned supporters from England’s next home international in their competitions.

Casey, a member of Britain’s upper chamber of parliament the House of Lords, said much of the trouble was foreseeable and organisers had been caught off-guard.

There had been a collective failure to plan for the worst, and police were deployed too late.

She recommended the government consider the creation of a special category of matches of national significance, where security would be tighter and with curbs on alcohol.

Better stewarding in the area immediately around the stadium was needed, and harsher penalties for anyone involved in football-related disorder, she added.

The Metropolitan Police said in a statement that officers and stewards faced “unprecedented challenges and unacceptable levels of violence in trying to bring about order”.

“Throughout the course of the day, this moment of national significance was tarnished by groups of ticketless, anti-social and thuggish football fans who were intent on causing disorder and committing criminal acts,” Metropolitan Police Service Commander Rachel Williams said.

“We regret that we were not able to do more to prevent those scenes unfolding. We vow to work with the FA and others, to learn from what went wrong and ensure those shocking scenes of thuggery are not repeated.” 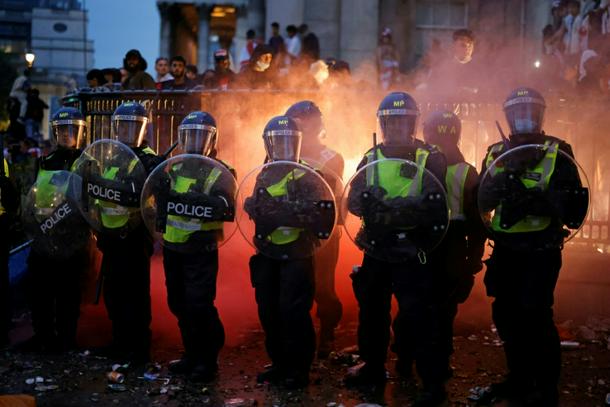 Some 2,000 ticketless fans were found to have gained access to the stadium in 17 separate breaches of disabled gates and emergency fire doors to the ground.

The breaches, which began from 90 minutes before kick-off and continued up to the penalty shoot-out, “jeopardised the lives of legitimate supporters and staff”, said Casey.

One individual even impersonated a steward and hijacked a disabled child in a wheelchair, separating him from his father, as he tried to get in.

The report quoted one emergency services official as saying the consequences of an England win would have been “horrific” and led to a major incident in London.

FA chief executive Mark Bullingham said everyone at the organisation was “appalled” by the disorder on what was England’s biggest game since the 1966 World Cup final.

“No event is set up to deal with such disgraceful behaviour from thousands of ticketless fans. Collectively we must never allow this to happen again,” he added.

Despite the Euro final mayhem, the UK and Ireland are considering a bid to host the 2030 World Cup.

Casey insisted those plans should not be abandoned because the lessons learned meant Wembley would be a safer place in future.

“The lessons that are learned from that actually make London and the country a better place than probably anywhere else because we’re never going to let this happen again,” she said.

Urging football authorities to make the final a catalyst for change, Casey added: “There’s something here about our national game that seems to be the vehicle for thuggery, hooliganism and racism.

“I would like to see ‘Euro Sunday’ as a turning point, that means were we ever to win the World Cup bid, we would absolutely never see sights like that again.”