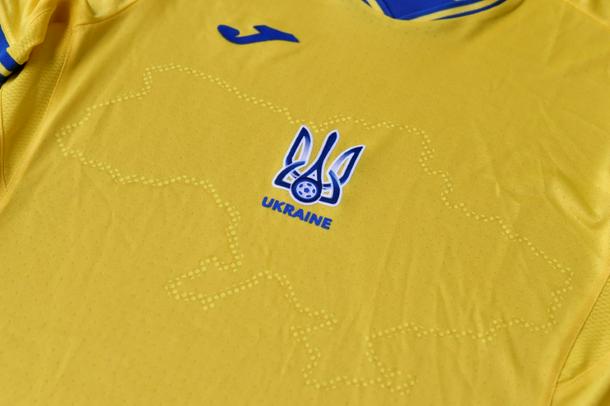 The shirt has proven controversial

Kiev (AFP) - Ukraine’s football association said Friday it had managed to agree on a compromise with UEFA over Euro 2020 kits that feature patriotic slogans and sparked Russia’s ire, but European football’s governing body said nothing had changed in practice.

“We’ve managed to reach a victorious compromise with UEFA!” the association chief, Andriy Pavelko, said in a statement on Facebook, describing the negotiations as “extremely tough”.

Kiev has angered Moscow after its football association unveiled Euro 2020 kits that show the outline of Ukraine including Crimea, which was annexed by Russia in 2014.

Russia criticised a slogan written on the inside of the shirts – “Glory to the Heroes”.

A UEFA spokesperson told AFP that Ukraine had agreed to cover up the slogan with a smaller map of the country.

“They will cover it up, and this will be checked by a (UEFA) delegate before each match,” the spokesperson said.

They added that this arrangement is “no different from what was decided” on Thursday.

“Glory to Ukraine! Glory to the Heroes!” are popular patriotic chants in Ukraine.

In 2014, they became a rallying cry for pro-Western protesters who ousted a Kremlin-backed leader.

But the Ukrainian battle cry has drawn criticism from Moscow for its association with World War II-era nationalist groups who cooperated with the Nazis and used it as a greeting.

European football’s governing body initially approved the design, but after Russia formally complained ordered the removal of the slogan “Glory to the Heroes”.

On Friday, Pavelko said that instead of removing the slogan altogether Ukraine would add another element to the inside of the jersey. The words “Glory to the Heroes” will be part of a new emblem featured on the shirt, said Pavelko.

UEFA earlier said the map would not need to be changed because a United Nations General Assembly Resolution “recognises the territorial borders as broadly depicted by the design”.

After Ukrainian protesters ousted Kremlin-backed president Viktor Yanukovych, Moscow annexed Crimea and supported pro-Russia separatists in the eastern Donetsk and Lugansk regions in a conflict that has claimed more than 13,000 lives since 2014.