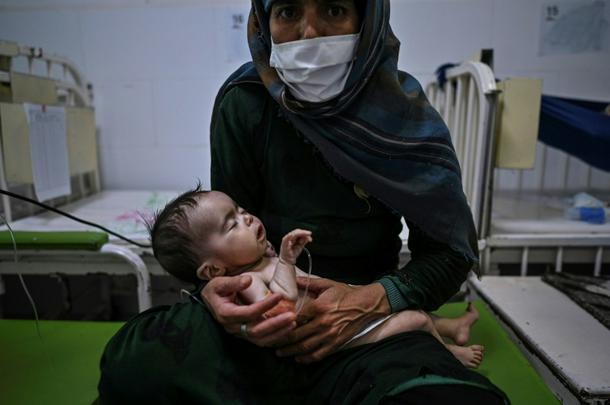 Herat (Afghanistan) (AFP) - When six-week-old Zubair arrives at a clinic for malnourished children in Afghanistan, doctors initially give him only a few hours to live.

And as he battles under a survival blanket his mother looks on – her feelings swinging desperately between fear and hope.

The Doctors Without Borders (MSF)-run facility in Herat, western Afghanistan’s biggest city, seeks to help the community cope with a public health system on its last legs, hobbled by the withdrawal of donor aid.

Since the Taliban overran Kabul in August, the facility has increased its capacity from 45 to 75 beds, and receives around 60 new patients each week.

Zubair’s mother Shabaneh Karimi travelled 150 kilometres (90 miles) to seek help for him, staying initially at an adjoining public hospital before being referred to the MSF clinic. 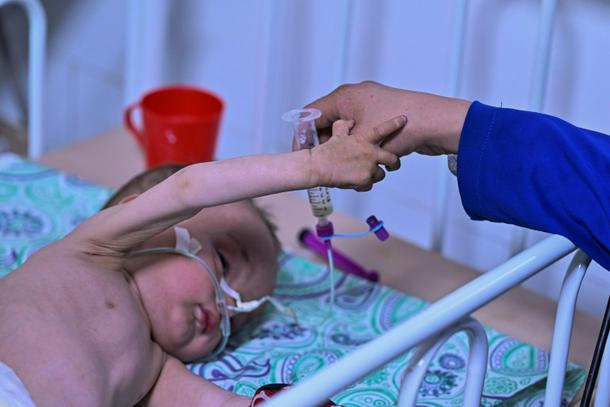 UNICEF estimates that some 3.2 million Afghan children under the age of five will suffer from malnutrition this winter

The little boy was quickly examined and put in intensive care, along with a dozen other infants.

His head almost entirely enveloped in an oxygen mask, he survived the night – and even recovered enough strength to cry.

Severely weakened by malnutrition, he is now battling a lung infection, she explained.

The UN’s children’s agency UNICEF estimates that some 3.2 million Afghan children under the age of five will suffer from malnutrition this winter.

A million of them could die in the absence of intervention, it calculates.

“Public hospitals don’t have supplies,” she added. “Doctors and nurses are not paid.”

In the next room, Halima watched over her nine-month-old twins – both showing characteristic swollen heads that signify they are suffering from a malnutrition-caused oedema, an excessive accumulation of fluid that is potentially fatal.

“I got worried when I saw their faces becoming bigger and bigger,” Halima said. 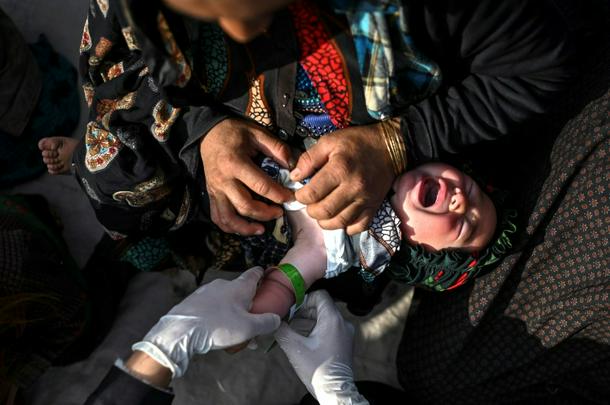 Before mothers leave the clinic, MSF hands them sachets containing peanut butter and vitamins, serving as a complete meal for one child of six months or older

“I tried to breastfeed them, but I didn’t have enough milk,” she said.

She then quickly ran out of money to buy powdered milk, and her husband, a drug addict, failed to help.

The twins are now battling measles, requiring them to be kept in isolation.

After two months at the clinic, another baby, five-month-old Ali Omar, is doing a little better.

But he still only weighs 3.1 kilograms – the weight of a healthy newborn. And, as his release approaches, his mother Sonita is worried.

“Will he make it through the winter if there is no milk and the house is not heated?”

Before mothers leave the clinic, MSF hands them sachets containing peanut butter and vitamins, serving as a complete meal for one child of six months or older.

“The problem is, sometimes the mothers… share one portion between their children,” chief nurse Giletta said.

Even getting babies on the right track is no guarantee they will stay there.

“We have a lot of readmissions,” said Christophe Garnier, MSF’s project coordinator in Herat.

After 40 years of war, malnutrition is a perennial problem in Afghanistan, exacerbated in recent years by severe droughts, he noted.

And since the summer, when the Taliban swept back into power, long-standing sanctions against the Islamists have deprived the new state of huge sums.

The previous, Western-backed regime depended on international aid for 75 percent of its budget. 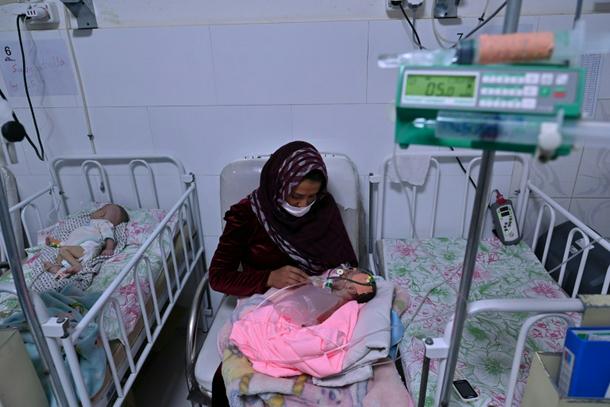 Unemployment has shot up in Afghanistan and food prices have surged

The US has frozen the Afghan central bank’s access to around $10 billion of reserves since the Taliban took power.

Unemployment has shot up, food prices have surged and suffering is visible across the country, particularly in camps for displaced people.

There are three such camps near Herat, housing 9,000 families who have fled the country’s successive wars and repeated droughts.

“When you’re hungry, you can’t think of anything else,” said Muhammad Amin, an elder.

The camp’s daily meal is often nothing more than a bit of bread and tea.

Deprived of work, Muhammad Amin is even considering selling one of his kidneys. 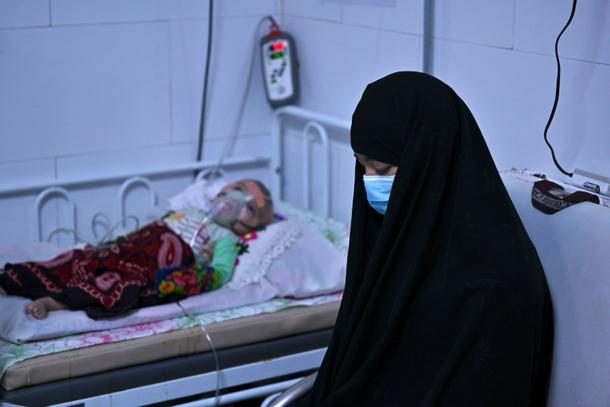 In the camps, MSF works closely with mothers who are sometimes completely destitute

“Of course, I thought about the consequences – but I think it might help the kids,” he said.

One of his neighbours urges against this move, referring to a relative who was left disabled after selling a kidney for 150,000 Afghanis ($1,550).

In the camps, MSF works closely with mothers who are sometimes completely destitute.

A medic places a screening bracelet on the arm of each baby, to measure malnutrition. One six-month-old scores in the red.

“I had milk for the first 40 days only,” his mother says.

She is invited to the MSF clinic in Herat, where she and her baby can access what is an unattainable luxury for many Afghans – three meals a day.