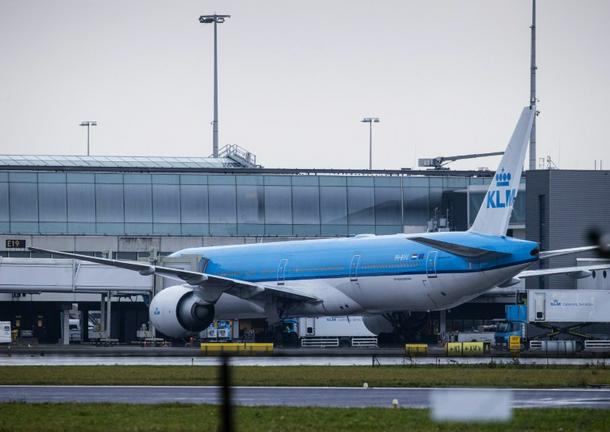 Sixty-one people from who had travelled from South Africa to the Netherlands tested positive for coronavirus, with 14 having the Omicron variant

Badhoevedorp (Netherlands) (AFP) - Welcome to the “Hotel Omicron” in the Netherlands, where a couple of quarantine fugitives have just discovered that you can check out any time you like, but you can’t leave.

There is little outward sign that the boxy, concrete Ramada hotel near Amsterdam’s Schiphol Airport is home to the world’s biggest confirmed cluster of cases of the new Omicron variant.

The clientele is usually passengers whose flights are late or conference attendees, says Dicky, an experienced local taxi driver who also dubs it the “Coronahotel”.

No police presence is visible in front of the hotel, and the only sign of any security are two guards who politely ask journalists to stop filming, without success.

In this country which prides itself on its respect for personal freedoms, the dozens of people quarantined here are in theory policed only by individual responsibility.

Dutch authorities transferred them here after finding 61 people with coronavirus among 624 travellers on two KLM flights from South Africa, where the new strain was first detected.

Fourteen are now confirmed to have the Omicron strain.

But Dutch policy is now under scrutiny after border police on Sunday arrested a 30-year-old Spanish man and a 28-year-old Portuguese woman who fled from the hotel.

In Badhoevedorp, the town on the outskirts of Amsterdam where the hotel is located, locals are unfazed by the fuss.

“I’m not scared of Covid,” says Anja, an accountant, despite having lost her sense of taste and smell for some 10 months after a bout of the virus last year. 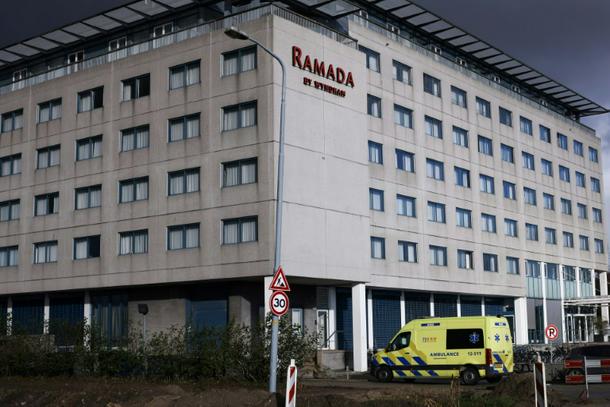 “It is like the flu, one night of fever and nothing else,” adds the 60-year-old, who refuses to be vaccinated.

Her boss Adam, 37, is also “reluctant” to be jabbed, even though he has pushed his mother and father to be vaccinated and his best friend nearly died.

However, he says Sunday night’s events at the hotel were “ridiculous” and “bizarre”.

In circumstances that have still not been fully explained, the quarantined couple managed to leave the hotel unnoticed, got to the airport and boarded a plane bound for Spain.

Border police caught up with them just before take-off.

One of the couple had tested positive for coronavirus, while the other was negative but had chosen to remain with their partner at the Ramada.

It was not clear whether the positive case was of the Omicron strain.

The couple are now in isolation in hospital, said Petra Faber, a spokeswoman for the mayor of the local Haarlemmermeer municipality, adding that their antics were “not really wise”.

“The ministry of justice is investigating whether what they did is a crime or not,” Faber told AFP.

Despite potentially being infected with what the World Health Organization terms a “variant of concern” that poses a high risk globally, the couple were not legally obliged to stay at the hotel. 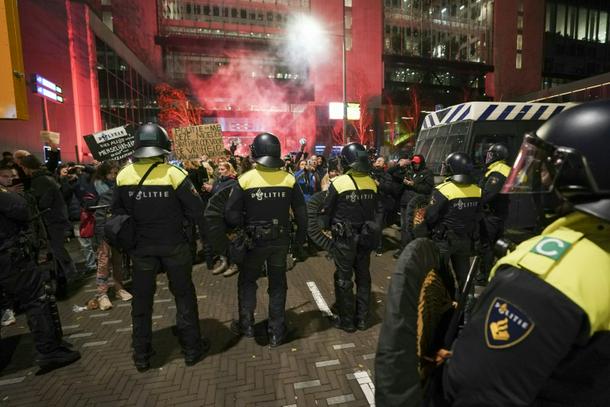 Around 50 of the 61 people who tested positive on the South Africa flights are at the Ramada, but others were allowed to go home to quarantine instead.

“We were hoping for people to be sensible,” said Faber.

“In the Netherlands, it is not illegal to be outside when you have tested positive for Covid. But when you go into a plane knowing you have it, then it is another story.”

“It can only be forced when someone is not following the rules. In the Netherlands, most people have this sense to follow what the government has decided for them,” he added.

“It is a crazy situation that they decided to leave the hotel. We are very disappointed. They endangered everyone around them, and our public health in general.”