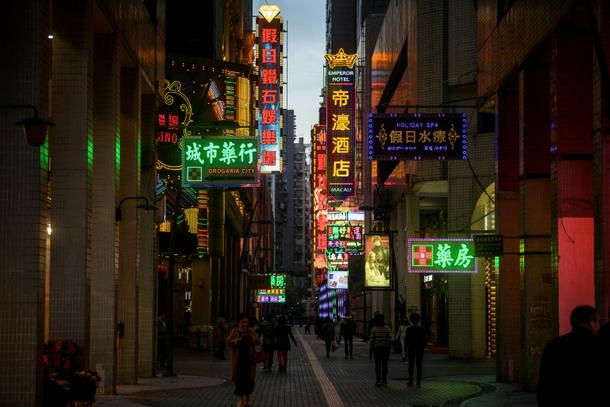 Alvin Chau, head of Suncity Group, was taken in for questioning over the weekend after mainland authorities announced they had issued a warrant for his arrest.

Macau police said their investigation was separate from the mainland’s and was the culmination of their own two-year investigation into the group’s activities.

It is the first time such a high profile figure from Macau’s gaming industry has been arrested in an ongoing crackdown against the sector, with plans announced in September to increase government regulation.

Suncity, which accounts for some 40 percent of the mostly mainland Chinese high-rollers who come to Macau, suspended trading in its shares on Monday, according to a statement filed with the Hong Kong stock exchange.

MGM led losses at nearly 10 percent down, followed by Melco and Wynn at some eight percent down. SJM closed down seven percent while Galaxy and Sands closed down five percent.

Almost all gambling is forbidden in mainland China but it is permitted in Macau, a former Portuguese colony that boasts a casino industry bigger than Las Vegas.

The vast majority of punters are mainlanders and junket operators like Suncity arrange for high-rollers to come to Macau for legal gambling.

But Macau police have accused Chau and ten others of setting up an illegal cross-border gambling and a money-laundering syndicate that enabled mainland Chinese to place bets online.

Evidence presented at Sunday’s press conference included $385,000 in cash as well as computer hard drives that had been seized.

Prosecutors in the mainland city of Wenzhou have launched a separate investigation accusing Chau of running an illegal gambling syndicate and causing “severe damage to the social order of the country”.

Suncity has yet to make a statement on the arrests. Junket operators in Macau have their licenses renewed annually and Suncity’s is due in January.

President Xi Jinping’s anti-corruption campaign has seen increased scrutiny of high-rollers and corrupt officials who might travel to Macau both to place bets and launder money.

The city had been trying to become less dependent on the casino industry even before the coronavirus wiped out gambling and tourism for much of 2020.

While numbers were picking up this year, they remain far below pre-pandemic levels.

In September officials announced plans to put government representatives on licensed operators’ boards to oversee their dealings, and to criminalise underground banking in the industry, a move that caused a plunge in casino operator share prices.

The six major casino operators are all required to rebid for their casino licenses when they expire in June 2022.