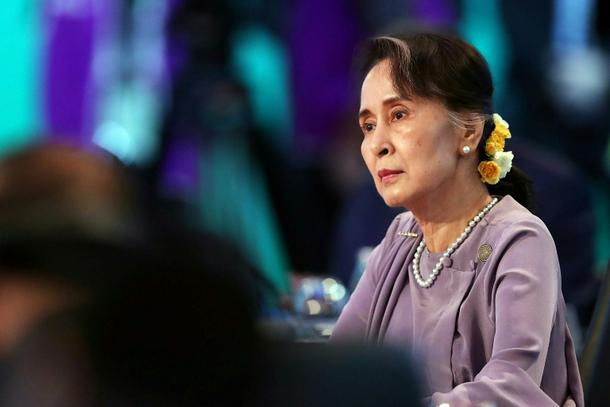 Aung San Suu Kyi faces three years in prison if found guilty of incitement against the military, as well as a catalogue of other charges that jail her for decades

Naypyidaw (Myanmar) (AFP) - A Myanmar junta court on Tuesday postponed giving a verdict in the trial of deposed civilian leader Aung San Suu Kyi, who faces a catalogue of charges that could see her jailed for decades.

The Nobel laureate has been detained since the generals ousted her government in the early hours of February 1, ending the Southeast Asian country’s brief democratic interlude.

More than 1,200 people have been killed and over 10,000 arrested in a crackdown on dissent, according to a local monitoring group.

The court, which had been expected to rule on her trial for incitement against the military – a charge that carries a three-year prison term – adjourned the verdict “until December 6,” said a source with knowledge of the case.

A verdict on a separate charge that Suu Kyi breached coronavirus restrictions during elections her party won last year – punishable by six months in jail or a fine – was deferred to the same date. 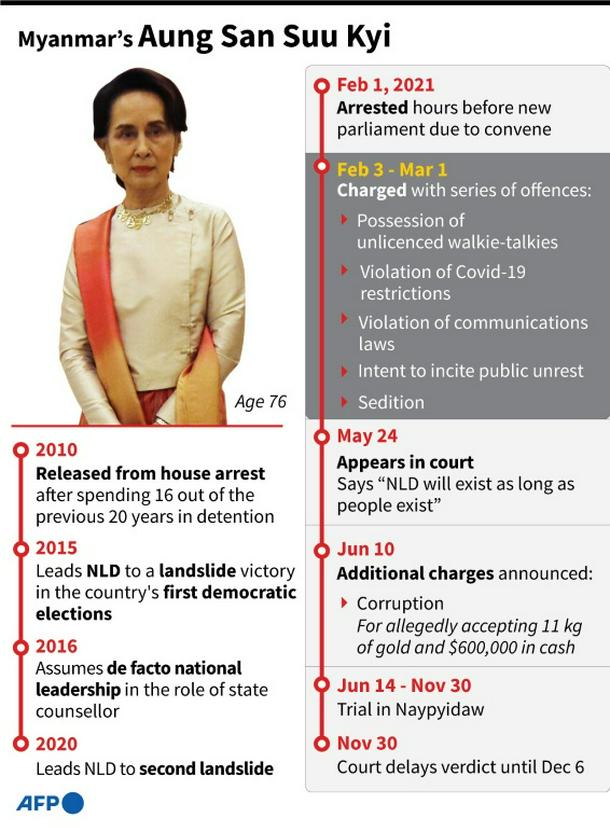 Journalists have been barred from proceedings in the special court in the military-built capital Naypyidaw and Suu Kyi’s lawyers were recently banned from speaking to the media.

There was a heavy security presence on the streets leading to the court on Tuesday morning, an AFP correspondent said, and the road to the parliament building was blocked by troops.

David Mathieson, an analyst formerly based in Myanmar, told AFP it was a “bizarre postponement”.

“There are obviously more politically motivated factors behind this than legal procedures as it’s a farcical show trial,” he said.

Suu Kyi and ousted president Win Myint were hit with new corruption charges late Tuesday related to the purchase of a helicopter when they were in government, the junta’s information team said in a statement.

The statement did not provide details on when the charges – which carry a maximum sentence of 15 years in jail – would be brought to court.

Days after the coup Suu Kyi was hit with obscure charges for possessing unlicensed walkie-talkies, and for violating coronavirus restrictions during elections her National League for Democracy (NLD) won in 2020.

The junta has since added a slew of other indictments, including violating the official secrets act, corruption and electoral fraud.

Suu Kyi now appears most weekdays at the junta courtroom, with her legal team saying last month the hectic schedule was taking a toll on the 76-year-old’s health.

Her long spells of house arrest under a previous junta were spent at her family’s colonial-era mansion in Yangon, where she would appear before thousands gathered on the other side of her garden fence.

Min Aung Hlaing’s regime has confined her to an undisclosed location in the capital, with her link to the outside world limited to brief pre-trial meetings with her lawyers.

In recent weeks, the trials of other ranking members of Suu Kyi’s National League for Democracy have wrapped up, with the junta doling out harsh sentences.

A former chief minister was sentenced to 75 years in jail earlier this month, while a close Suu Kyi aide was jailed for 20.

The military, which has dominated life in Myanmar for decades, has defended its power grab, citing fraud allegations in last year’s general election, which Suu Kyi’s party won comfortably.

International pressure on the junta to restore democracy swiftly has shown no sign of knocking the generals off course, and bloody clashes with anti-coup protesters continue across the country.