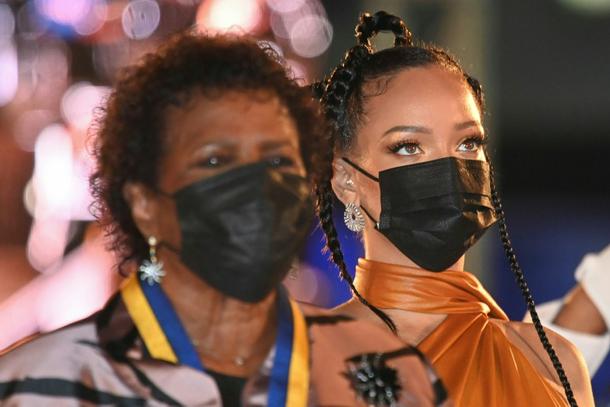 Rihanna (with President Sandra Mason, L) was declared a national hero of Barbados minutes after the island became the world's newest republic

Barbados had already conferred the title of ambassador extraordinary and plenipotentiary on the billionaire multiple Grammy-winning singer and businesswoman in 2018 and tasked her with encouraging education and tourism.

The “Umbrella” songstress commanded “the imagination of the world through the pursuit of excellence with her creativity, her discipline, and above all else, her extraordinary commitment to the land of her birth,” Prime Minister Mia Mottley told the assembled dignitaries at the “Pride of Nationhood” celebrations on Tuesday.

“On behalf of a grateful nation, but an even prouder people, we therefore present to you the designee for national hero of Barbados, Ambassador Robyn Rihanna Fenty,” Mottley said, inviting the singer up to stand alongside her. 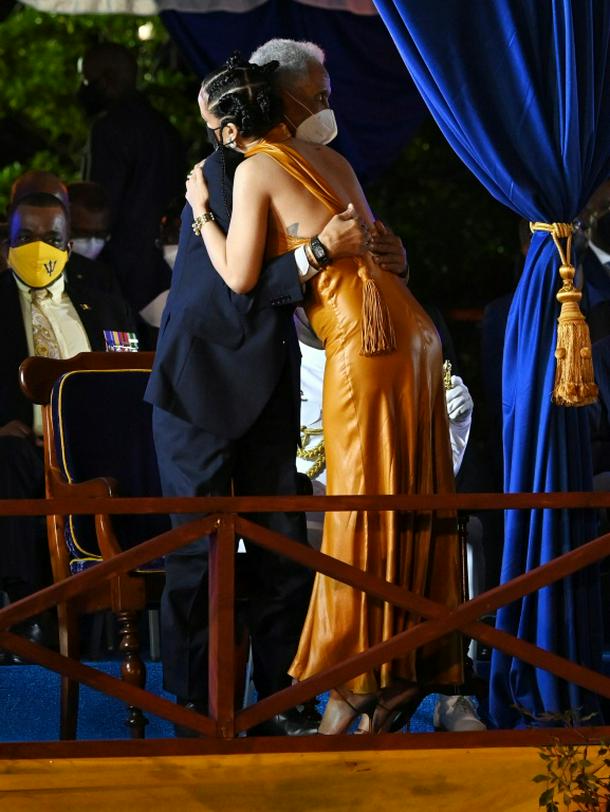 Garfield Sobers, regarded as one of the greatest cricketers of all time, hugs fellow national hero Rihanna

“May you continue to shine like a diamond and bring honor to your nation by your words, by your actions, and to do credit, wherever you shall go,” she said, with a nod to the singer’s hit “Diamonds.”

Mottley paid tribute to the humble origins of Rihanna, who was born in Saint Michael and raised in the capital Bridgetown.

Rihanna, 33, grew up in a troubled home in Barbados and was propelled to fame after American producer Evan Rogers recognized her talents.

The star parlayed her musical success into a make-up and fashion empire, with earnings that now dwarf those of other megastars such as Madonna and Beyonce.

Forbes in August estimated she was worth $1.7 billion, around $1.4 billion of which comes from the value of her cosmetics company Fenty Beauty, a partnership with French fashion giant LVMH.

Mottley said the government chose to honor Rihanna as the first national hero designated by the new republic as a “signal to the world.”

Rihanna joins a select group of 10 other Barbadians including Garfield Sobers, regarded as one of the greatest cricketers of all time and the only other living national hero.

Sobers was also at the ceremony and hugged Rihanna.

The title would be conferred on her Wednesday morning, the prime minister said.

Rihanna was among many nominations for national hero submitted by the people of Barbados and Mottley said others would be named by National Heroes Day next year.

The independence ceremony was closed to the general public amid a pandemic curfew, which was relaxed to allow Barbadians to enjoy festivities including fireworks displays.

The guest of honor was Britain’s Prince Charles, who acknowledged the “appalling atrocity of slavery” the island suffered under colonial rule.